There was a moment during yesterday’s field vision test where I grew discouraged. My head was against a half sphere that reminded me of a personal planetarium. The inside of the dome was broken up into four quadrants and an orange light illuminated midway up the line that divided the top two quarter panels. A button rested in my hand that created an audible sound when I pressed it. My job was to push it whenever I saw a dot of light in my periphery. I’ve never been so excited to see dots of light. And I’ve never been so bummed when I didn’t.

I sat for a long seven seconds before I grew disheartened. In my mind, I knew that dots were flashing, but my thumb stood still. Maybe it’s because my eyes were tired. After all, I’ve been sleeping more than normal lately. I keep hoping that all my eyes need is a little more rest. Every morning since Sunday has been like Christmas. I wake up with the thought that maybe that day will be the day that my optic nerve head is less inflamed and that my vision is restored. I’m still waiting for the package under the tree.

“How did it go?” asked Katie. I had just walked out of the exam room. The room was really small so she had to wait in the lobby. “Not well.” I sat down in the chair and didn’t say much. Katie hugged me and reminded me that it wasn’t a test of me, but that it was a test for me. “They are just trying to measure where you are so that they can get you to a better place,” she said. And she was right. One of the lessons I’ve struggled with the most is thinking that I can control any of this. I knew that I wasn’t going to do well on the field vision test. I had even told Katie beforehand that I’d do horribly. My vision has barely improved over the past couple of days. But I had hoped that I just didn’t notice the improvement, and that my concerted effort would reveal new progress. When it didn’t, it made me sad. I had set myself up for disappointment, and futility once again called my number.

I told Katie that I didn’t want to write another blog where I sounded discouraged, but I started thinking about how much I need to remember the valleys to truly appreciate the peaks. How disheartened I’d be to look back, after it’s all said and done, and not accurately remember how far we’ve come, how much we’ve been encouraged, and how God has shaped our hearts towards Himself and others. I can’t pretend that disappointment doesn’t exist. It does, and it wants to linger around. It always wants to linger around. 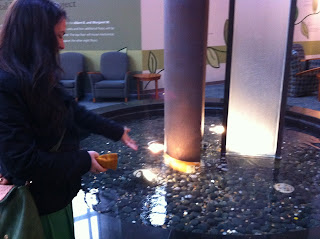 After we shared some words of encouragement, we spent some time waiting in the lobby for an MRI I’d have later that evening. One of the lobbies to the main building at MD Anderson has a beautiful and serene  waterfall. Like most public waterfalls, it has coins at the bottom from people who’ve made a wish. Since we had just come from the ophthalmologist, I told Katie that we could wish for my eyes to be restored. I really just wanted to drop in a coin and make a splash. So she grabbed some coins out of her purse and we contributed to the MD Anderson Cancer fund. 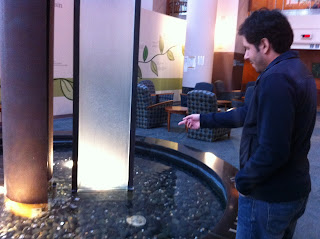 I, of course, wanted bagpipes, singing children, the choir in Sister Act, and a fog machine to come through the front doors for my photo op., but we couldn’t arrange all of that in the minute that we had. So I settled on a toss of solitude, which will really be appreciated in an art gallery somewhere. Either way, I just hope that while I was doing this, somebody, somewhere wasn’t pouring out a 40 oz. and dedicating it to my eyes. That would have cancelled this out, and it would have been really uncool. 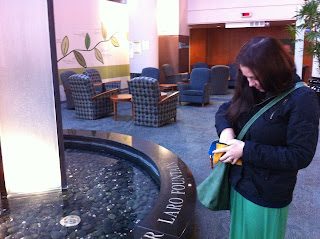 Moments later, I asked Katie, “Did you make a wish?” “OH! Oops!” she replied. Oops? I wanted to go into my Rodney Dangerfield bit, but I figured I better not wear it out. And when I say wear it out, I really mean that I better not get it started. I better not get it started because I don’t really know any Rodney Dangerfield jokes. I don’t get any respect. There. The picture to the right shows Katie taking out another coin so that she can make a wish the right way. We don’t cut any corners when it comes to my eyes. 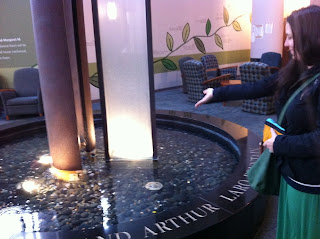 Finally, Katie found a coin and made a wish. I hope it was about my eyes. I forgot to ask. And I hope that it was more than a penny. I mean, only Larry the Cable guy puts pennies in a fountain, right? I need Katie to start dropping in dimes, so that if I ever need to get my eye removed, I can tell the doc to grab the dime that Katie threw into the fountain and just kind of install it into the socket. If you ever see a surgeon carrying a caulk gun, don’t stop him. Know that it was my idea. Or “eye”dea. (rim shot)

To make sure there was nothing behind the optic nerve inflammation, the ophthalmologist wanted me to have an MRI scan of my brain. So last night, I had my first opportunity to slide into the MRI machine. If you’ve never had that opportunity, it’s probably what you imagine. You lay on a table and they slide you into what looks like an open ended rocket. For about forty five minutes, the machine alternates between noises that sound as if you’re in a life sized pinball machine, like they’re testing new sounds for the emergency alert system, and as though the neighbor’s awkward kid is putting together his first band. I had originally planned on taking a nap in there, but I quickly learned that the idea was a cute one when ear plugs didn’t do much to drown out the sound.

Today, I had a follow up appointment with the ophthalmologist to make sure the pressure in my eyes was still in the normal ranges. The results were great. An 8 in both eyes! Although the optic nerve head is still swollen and inflamed, the pressure has stayed down. More great news is that the MRI test results were clear of any pathological evidence, which further substantiates my doctors’ theory that my sudden change in vision was a result of the trial drug. The prognosis on my eyesight getting back to normal is longer than expected, however. The doctor said it is a matter of weeks, not days, until the inflammation goes down. It was great news, and such a relief. I had begun to wonder if it was possible that suffering through high pressure for three days had incurred some permanent damage. Every day that I couldn’t see made me wonder even more. The news will do a lot for my frustrations. We’ll have more appointments in the upcoming weeks, as we keep an eye on my situation (no pun intended).

It was a great end to a stressful week. Throughout all of the chaos, frustration, big words, cloudy vision, disappointment, heartache, tears, laughter, fears, and ridiculous parking fees, I am reminded that God is good. Even though I still face an uphill battle, God is good. I won’t for a second believe that this life is as good as it gets, but while I’m here, I’ll celebrate our victories with thanksgiving. After all, just because I’m fighting a battle to preserve my life, it doesn’t mean that I can’t lose it at any other point in time. Thank you for your continued prayers. They mean the world. 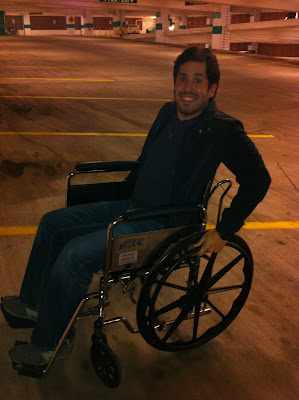 P.S. I’m not in a wheelchair, but I found it in the parking lot so I had to give it a spin.