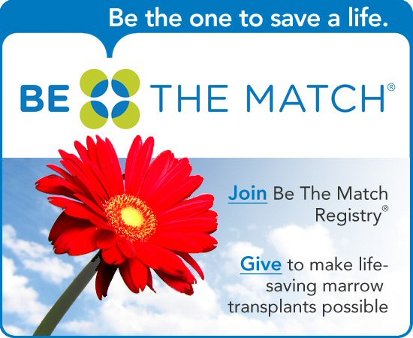 Recently, people have asked me about getting tested to see if they are a match for bone marrow donation. Although we’ve begun the process of seeing if my siblings and/or parents are a match, I’m still learning a lot about the process. Sadly, even though I’ve lived with Chronic Myeloid Leukemia for six years, I’ve never really understood the details of how it all works.

After talking with Dr. Ciurea, the transplant doctor at MD Anderson, I received some insight that I wanted to share. At the very worst, I’ll be able to answer some of the most basic questions. Let’s just shoot for the worst here. It will make this blog post a lot easier since I didn’t stay at a Holiday Inn Express last night.

The Process of Finding a Match

Before the process of matching even begins, the medical team looks at my HLA type. Human Leukocyte Antigens are proteins that are found in almost every cell of your body. It’s kind of like the eye that surpasses the many retina scanner’s of the organs, tissues, etc. These markers are provided by your DNA, just as being born into a wealthy family is provided by privileged sperm.

In the terms of cells, your body is the most exclusive party ever thrown. Not just anybody is on the access list. Those that aren’t, are usually waiting outside, behind a velvet rope, pounding Red Bulls, with the hope that the bouncer will one day take that $20 to let them in. The truth is that those on the outside of the club are real party crashers. Think Gremlins, swinging from lamps and rotating on ceiling fans. The body is right to not let them into this particular party. In this sense, our DNA is the real Wizard of Oz.


Here’s another example. Let’s say that the United States invaded Afghanistan to liberate the Afghan’s from a ruthless Taliban regime. Soon after removing the Taliban from power, the challenge to build a viable military led by a viable government would be a lot more difficult if any and everyone could sign up to help stabilize the area. Therefore, it would important to screen the military from soldiers still committed to the old regime, in order to prevent the sabotage of deceit and unrest from occurring. Neglecting to do so would lead to an outright civil war, where each group believed the other was the enemy. Cells with different HLA typing work the same way. They end up seeing the other as foreign, and attack each other. That would put me in a bad mood.

There are five markers transplant specialists specifically look at when determining whether a person is a suitable bone marrow donor. Since each person has a set of genes from their mother and father, there are ten markers total.  Those markers are labeled A, B, C, DRB, and DQ. Because my siblings and I have the same mother and father, they would most likely be the best match for stem cell transplantation. If they weren’t great candidates, the next step would be to look at my parents. The hope would be that they’d be at least a 50% match. Beyond that, Dr. Ciurea suggested that there’s a really small chance we’d find a suitable donor in my extended family. The medical team would then begin looking for a match in the national bone marrow registry. A superficial search of those who match me in at least 3 of the 10 markers resulted in 42 possible donors. Hopefully, a more thorough look at the donors’ HLA typing wouldn’t eliminate them from candidacy.

Testing to Be My Bone Marrow Donor

Just before he walked out of the door, I asked Dr. Ciurea, “I have a lot of friends and family who have told me that they’d be willing to be tested to see if they are a match. Would they be able to test for me?” I’m sure it’s a question they answer a million times. “The likelihood of one of them being your match is next to zero percent,” he said, “If they want to get tested anyway, we would suggest that they register in the National Bone Marrow Registry so that even if they aren’t a match for you, they could possibly be for someone else.”

This is good to know. HLA type testing can be expensive. If you were to test for me, or for anyone else, you would have to do it on your own expense. Because the costs can range from $200 – $800 for an HLA type test, insurance companies are stingy as to who they test. In fact, our contact person who is organizing my family’s testing said that sometimes it’s a battle just to get siblings and parents tested. Normally, insurance concedes, but attempting to have the costs of friends and distant family tested is futile. I suppose they figure they’d have better odds buying me a lottery ticket so that I could cover the costs on my own.

Registering to Save a Life

When I was first diagnosed with CML, in 2006, I had a friend in an Anatomy and Physiology class whose mom was the nurse working with my oncologist. One afternoon, just before our lab, she shared with me that my diagnosis inspired her to sign up for the National Bone Marrow registry. At the time, I was overwhelmed with my diagnosis. I knew the registry was important in the big scheme of things, but I didn’t exactly understand how it all worked. Nevertheless, I still think of that to do this day and admire her for her courage. What a special, caring, and thoughtful person to put herself in a position to possibly save another human’s life. I mean, I was the one with Leukemia and I don’t even think I would have had the courage to sign up. In the end, her acting on the inspiration I indirectly gave her has, to this day, inspired me. That’s been the theme of my illness. People who are inspired by my struggles have inspired me. I’m thankful for that.

Marrow.org is the website for the national bone marrow registry. It is where people like me will go, for one last hope, one last parachute. By the time a patient searches the registry, it’s as if they’re on this plane that is going down, and everybody but one has jumped off. The person in front of them has a parachute, and they’re frantically searching the rest of the plane to see if there is one parachute left. What a sad and empty feeling to know that no parachute can be found. Sadly, the awareness for bone marrow donations isn’t what it needs to be, especially with minorities. Maybe I can do my part to help with that in the future.

You can find detailed information from the website, but donating isn’t as bad as I thought it would be. If you decide to donate and are chosen, it may be as simple as providing blood. The other donation would be through a same-day outpatient bone marrow procedure that is similar to the bone marrow biopsy/aspiration I have to go through every three months, however, the donor is put under general anesthesia. If you have any questions about that, you can ask me. In fact, if you have any questions period, ask me, and if I don’t have the answer, I’ll find it.

Thank you all for your texts, calls, comments, and messages. To know that someone would be willing to make a small sacrifice to save my life is such a positive and uplifting feeling, especially when faced with the uncertainties of an unseen illness. Like I’ve said and will continue to say, I’m inspired by all of the positivity surrounding my cancer. Every morning that I wake up, I’m reminded that I serve a purpose on earth. If I can indirectly save a life in the process, that’s just about all I could ever ask for.