Yesterday was the first day of my clinical trial for the protocol called DCC-2036. I’ll have an appointment once a week for a month, then once a month for five months, and then possibly once every three months after that.

In November, Aetna denied to cover my initial request for the trial. I had to wait for a month and a half while we appealed the decision. At the beginning of the new year, Blue Cross/Blue Shield became my insurance carrier and within two days, they agreed to cover me. In the eyes of science, the six week window between my old tests and the trial date was too large. That disqualified the old tests from being used to justify my need to be in the trial to begin with. As a result, I came to Houston last week to administer and submit new tests to the pharmaceutical company holding the trial. I got a chance to have another bone marrow biopsy and aspiration (where they draw liquid from inside of the bone). It was great fun. Based on the history of having bone marrow repeatedly taken from my body, I’d be a horrible candidate to be eaten after an airplane crash into the side of a snowy mountain. Sweet!

Back to yesterday. I won’t bore you to death with the details, but it goes a little something like this: I gave enough vials of blood to taunt Edward Cullen, I had sticky patches and cables put all over my chest to measure my heartbeat intervals like Ivan Drago in Rocky IV, and I had the great pleasure of testing my liver function in a manner involving the bathroom and a plastic cup a la any bathroom scene in Austin Powers, all before lunch. Life isn’t so bad. I enjoy being a faux movie star. 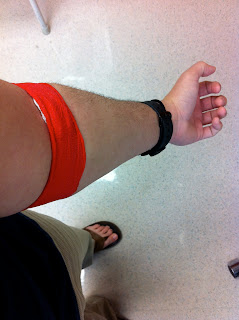 Soon after all of the testing was over, I walked over to the other side of the wing to have my vital signs taken. It’s where I get to find out how fat I am (weighed), how I’m not so much a hypochondriac (I nail 97.8 degrees every time), and how putting a blood pressure cuff on your arm never really lives up to all of the excitement of its ability to inflate and deflate itself at the push of a button. As soon as that was over, Katie and I waited in the waiting room to be put in another room where we would wait for the doctor (Jerry Seinfeld’s old bit). Amidst all of that, however, I kept myself occupied by a perfectly placed, round, metal cylinder called a trash can. 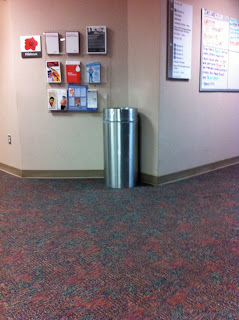 I can’t tell you how many times I asked Katie if she thought I could make it. Ok, yes I can. Three. The first ball I made was from the red bandage that covered the needle mark on my arm. It makes such an awesome ball. “I hope someone comes from the blind side and you hit them,” said Katie as I raised my right arm. “Me too,” I responded. Our backs were against the wall and the possibility of that happening was high. BANG. Brick. I was a little short. I got up as fast as I could to minimize the embarrassment, grabbed the manipulated ball, and began to walk back. A few steps towards my chair and I couldn’t take it anymore (turn-around fadeway *Swish*).

Moments later, I asked Katie for a tissue. I’ve been fighting allergies recently. She asked, “You’re just wanting to make another ball to shoot, aren’t you?” “No.” I blew my nose and made another ball. BANG. Wedged between the trash can and wall, I shot this one a little too far.

I’ll have time to perfect my game.

We finally met with the doctor and research nurse around 1:45pm. I received my new medicine and popped the new pills in the office. It was an anticlimactic beginning to what I was hoping would be the rest of my life. Two 75mg pills on an empty stomach, two times a day. Not bad.

After the appointment, Katie and I had a little time to eat. We went downstairs to the cafeteria and grabbed a bite, but we were already late for another appointment we had with the Dr. Ciurea in the stem cell transplant department. Dr. Cortes, my oncologist had set this appointment up. During our initial talk in November, Dr. Cortes suggested that I start the trial, but that I also initiate the process of testing for a bone marrow match in the event that the trial does not go well. It’s best to be prepared.

The meeting with Dr. Ciurea caught Katie and me a little off-guard. I went in to the appointment with the idea that we’d begin the process of packing this parachute in case I needed it and left thinking that it may be the only real and significant option that I have left. Dr. Ciurea suggested, based on the recent turbulence of my illness, that I’d be facing an uphill battle from now on, and that even the “low probability” of a complete molecular response (remission) would be temporary, at best. He said that the behavior of my illness has shown a great amount of volatility, and that the t315i mutation that has prevented my medicine from working (to this point) is a perfect example of that. He suggested that a bone marrow transplant would be the only long term solution.

He sat with us for about thirty minutes as he explained the process, the way the transplant works, how they look for matches, how long the recovery would be (four months), the potential complications, and how far these procedures have come over the years. He also answered all of the questions that we could come up with in the limited time we were there. It was information overload.

In reality, I left feeling a lot better about the procedure. It’s not as invasive as I thought it would be. It’s not as painful as I thought it would be. I won’t be in a bubble like I thought I’d be. I won’t be isolated. And the likelihood of making it through without any significant issues can be pretty high if I have a good enough match. It’s still a major operation, but it’s a lot less scarier than I anticipated.

Needless to say, I can tell I’m getting to the top of the mountain because the weather is getting colder, the elements are rougher, my level of comfort is waning, and I find myself in a place where people have usually had enough and turn around. However, this is a journey where I can’t turn around. I’ve been praying for moments like this, moments of healing, for opportunities to see God for who He is and not what I believe, or even want Him to be, for my mind be taken from a place of mediocre belief and transformed into a faith designed by God, for his children. I would be saddened if, in a moment where all of those things are given to me, I turned away and said, “No, I want to experience this kind of faith in my own way, with my own understanding, in the safety net of my own comfort, where I’m not hurt, where I’m unchallenged, where I can’t be used and I won’t be called upon.” It would be much easier to do that. It would make a lot more sense to me. It would lead to a safe faith, where I could call upon God to help get me out of a speeding ticket or to get me a particular job. But all of that would lead to emptiness. There is already way too much emptiness on this earth.

I grew tired of making requests of God and began praying that I would instead pay attention to the requests God has made of me. And quite honestly, the first step in that is having the faith that this will all make sense in the end. Whether or not I struggle negatively with the circumstances is irrelevant to the big picture. What is relevant is the transformation of my self, understanding, wisdom, knowledge, joy, hope, etc through all of the circumstances I may find myself in. I admit that this would be twice as hard on me if I wasn’t the one going through all of this, so I want everyone to know where I’m coming from. Maybe that will make things a little easier for all of us.

It’s not easy. As I comfort my family, I see and feel their pain as they worry about all of the things that can go wrong. I empathize, because I know that I live in a broken, imperfect, fallen, and temporary world where faith isn’t an exemption for mortality. But this is why we pray. This is why I have friends and family. This is why God has given us His word. So that we can celebrate our existence through hope, find patience in affliction, and remain faithful to a true and perfect love. As much as the world sometimes tries to convince us otherwise, I hold on to that truth.

As for now, I will stay with the clinical trial. We’ll monitor it for the month that we are here and I’ll talk to Dr. Cortes about the opinions and outlook Dr. Ciurea shared with us. Hopefully, the trial goes so well that down the line we’ll have to make the difficult decision to stay with the drug or move forward with the transplant.

Stay positive. See the good in all things.